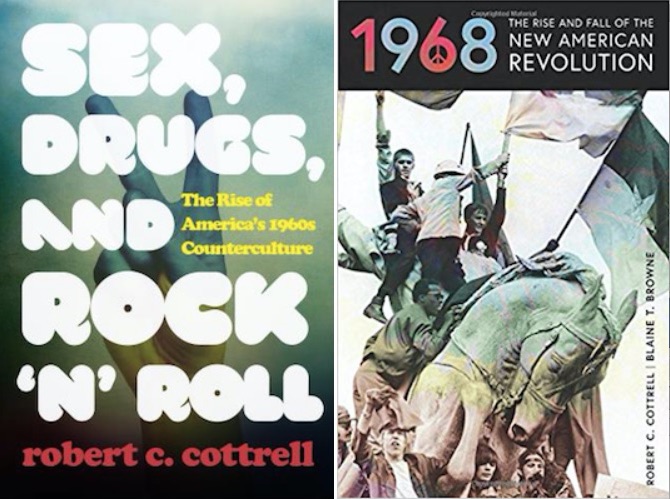 Cultural historian Robert C. Cottrell is Thorne Dreyer's guest on Rag Radio. Bob's two most recent books are Sex, Drugs, and Rock 'n Roll: The Rise of America's 1960s Counterculture and 1968: The Rise and Fall of the New American Revolution. Cottrell's book on the counterculture includes an extensive look at The Rag and the political scene during the 1960s in Austin, where he lived for several years, participated in the antiwar movement and draft counseling, and was one of the very long-haired individuals who made up the city's counterculture. At one point, however briefly, he hawked copies of The Rag. Bob Cottrell grew up in San Antonio, graduated from the University of Texas at Austin, attended graduate school in Texas, California, and Oklahoma, and has been a Professor of History and American Studies at California State University, Chico, since 1984. He has traveled widely, and taught in London; Puebla, Mexico; and Moscow, where he held the Fulbright Nikolay V. Sivachev Distinguished Chair in U.S. History and American Studies. Cottrell's special interest is reform and radicalism, with biographies of the iconoclastic journalist I.F. Stone, Social Gospel minister E. Nicholas Comfort of the progressive Oklahoma School of Religion, and ACLU founder Roger Nash Baldwin. He also wrote a book on WWII conscientious objectors who served as smokejumpers for the U.S. Forest Service; a dual biography of Hank Greenberg and Jackie Robinson, focusing on anti-Semitism and racism; and, most recently, Sex, Drugs, and Rock 'n Roll: The Rise of America's 1960s Counterculture and 1968: The Rise and Fall of the New American Revolution, written with Blaine T. Brown.
Rag Radio is produced in the studios of KOOP 91.7-FM, an all-volunteer, cooperatively-run, solar powered community radio station in Austin, Texas, in association with The Rag Blog and the New Journalism Project, a Texas 501(c)(3) nonprofit. It is streamed live on the Internet at KOOP.org and Radio Free America. The host and producer of Rag Radio, Thorne Dreyer, is a prominent Austin-based activist and writer who was a pioneer of the ’60s underground press movement. The show’s engineer and co-producer is Tracey Schulz and the staff photographer is Roger Baker; Suzy Shelor is Rag Radio associate; Alice Embree is guest host; and Glenn Smith is our political analyst. The syndicated show is broadcast (and streamed) live Fridays, 2-3 p.m. Central) on KOOP, and is later rebroadcast and streamed on WFTE-FM in Mt. Cobb and Scranton, PA., on Houston Pacifica's KPFT HD-3 90.1, by KKRN, 88.5-FM in Round Mountain, CA, and at WALHRadio.com in Wilmington, OH -- and as a featured podcast at Veterans Today. Learn more about Rag Radio here.